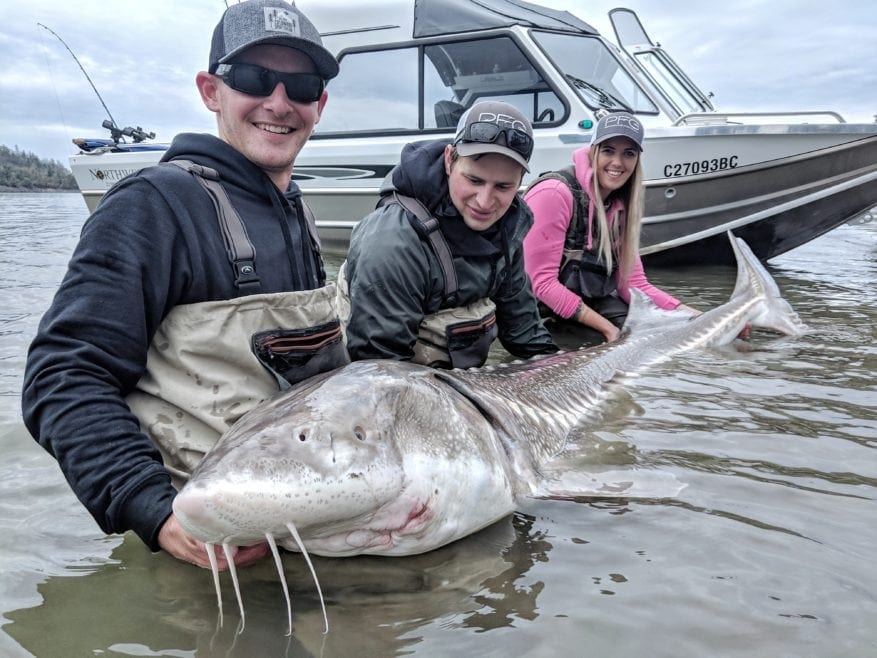 The white sturgeon’s overall body shape is long and cylindrical with the color on the back a brown or grey and the color on the bellies a gleaming white. Instead of fish scales, the sturgeon body is covered with 5 rows of bony plates called scutes. White Sturgeon have an exoskeleton so the only bones in their body are their skull and the bony plates. Their spine is made of a coiled cartilage called a monochord. The unique feature of the white sturgeon is it’s flattened nose or rostrum. On the underside of the rostrum just in front of the mouth are four barbels or fleshy whisker-like projections that are used as sensory organs to detect scent and food in the murky water at the bottom of the river. White Sturgeon have ampullae of Lorenzini which are special sensing organs, called electroreceptors, which form a network of jelly-filled pores. This allows them to detect the heartbeat of their prey. To further hone in on their prey, they also have chemical receptors inside their heads to detect fish in distress. White sturgeon can attain lengths in excess of six meters, weights of over 600 kilograms, and can live for over 150 years. White Sturgeon measuring 7-to-12 feet long is a common size for adult sturgeons, and some varieties can get to over 18-feet-long

White Sturgeon have a very long lifespan with some in BC over 100 years old. White Sturgeon tend to grow slowly and are not ready to spawn until the females are over 18 years of age and males are at least 14 years of age. However, they are able to spawn multiple times over a lifetime. White Sturgeon spawn by using the broadcast spawning method where the male and female release sperm and eggs together in the water current. The fertilized eggs  become sticky and attach to the river bottom where they mature into larvae in 8-15 days and then spend another 20-30 days nestled in the river bed until they metamorphose into free swimming young sturgeon 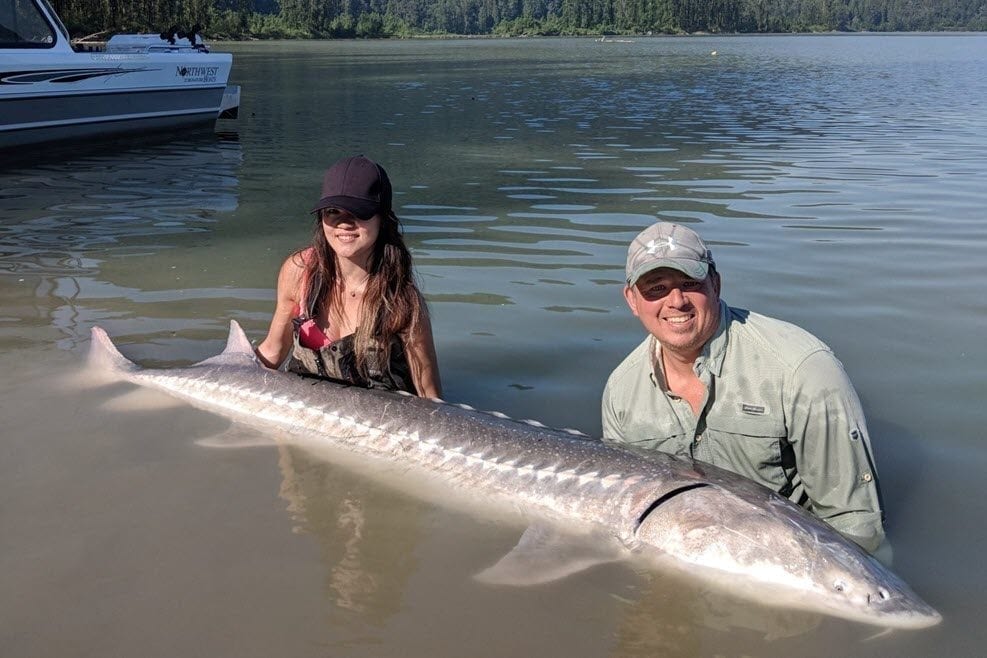 The white sturgeon has quickly become a popular game fish, pursued by anglers from all around the world. When they are caught they put on quite a show and often leap into the air. There are many white sturgeon residing in the Fraser River and sturgeon fishing is available year round but prime season is between March and November. There are two major feeding periods when sturgeon fishing is at its best; April- June and September- November. During the winter months most fish being caught are smaller (2 to 4 feet is average). Successfully catching sturgeon involves finding them. There are two ways to fish for white sturgeon; from a boat or from shore. Rods and reels used are different for each method. White sturgeon for the most part, tend to concentrate in holes, seams or drop-offs within the river bottom. They also enjoy hanging out in back channels of the Fraser.

Fishing a variety of baits is the key to finding what’s working best that day. Using a bait that is present in the area will produce larger fish. Some baits that are used are eulichans, lamprey,  ditch eels, headless fin fish, dew worms, Salmon gills and salmon roe. It’s best to have a variety on hand when trying to allure some sturgeon.

If you are interested in catching some white sturgeon, I over 37 years of experience fishing the Fraser River and can accommodate all levels of fishing experience. Contact me for more details about our Fraser River fishing trips. 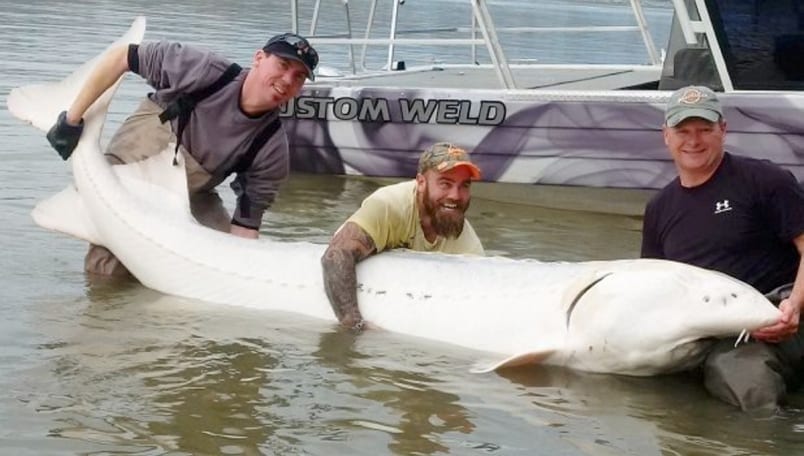 Canadian fisherman landed a rare and enormous albino sturgeon that very well might be a world record with the fish measuring an incredible 11 feet, two inches and weighing an estimated 1,000 lbs or more.

After taking photographs at the shoreline, Helmer released the albino sturgeon, leaving him with amazing memories.

With the high number of anglers partaking in this fishery, it’s very important that the fish have been managed properly to minimize effect and make sure that the fishery is sustainable. The Ministry of Forests, Lands and Natural Resource Operations (with assistance in the Fraser River Sturgeon Conservation Society, Fraser Valley Angling Guides Association, Recreational Sturgeon Anglers of BC, and Fisheries and Oceans Canada) has created guidelines for catching and correctly releasing sturgeon. Anybody who fishes for white sturgeon on the Lower or Middle Fraser River is invited to read and follow the Guidelines for Angling White Sturgeon at BC.

The Fraser River Sturgeon Conservation Society (with assistance in the Habitat Conservation Trust Foundation, Province of B.C., Fisheries and Oceans Canada, along with the Rick Hansen Foundation) has also put together a movie which covers those recommendations in more detail. Strategies for Angling Sturgeon at BC.