Our Sturgeon Fishing Report aims to be your number one resource for the latest up to date water conditions, bait we are using and on the water highlights. Conditions are constantly changing, as such it's always best to keep informed of what's going on before you head out as this enables you to increase your odds of hooking up. 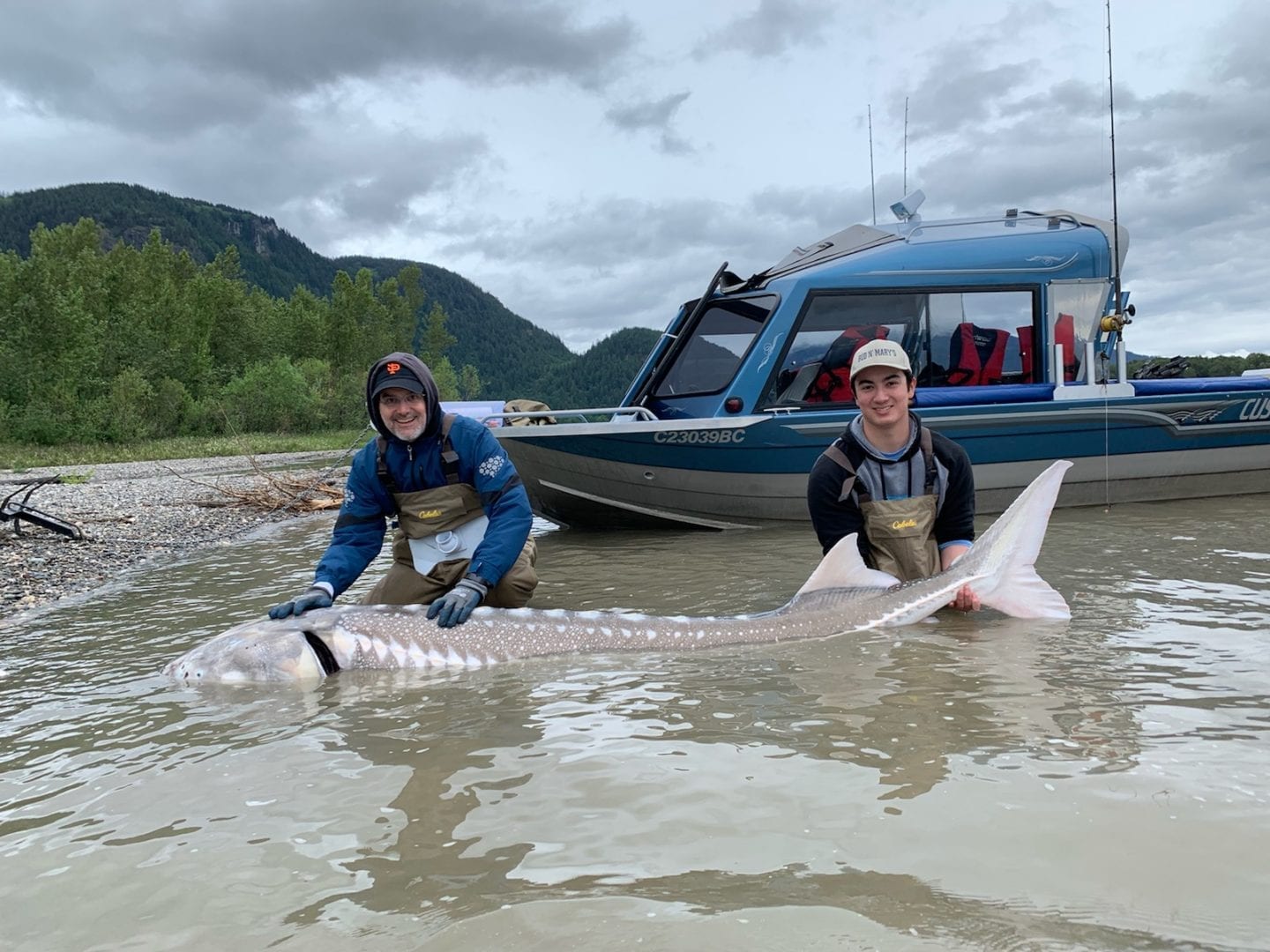 For the last couple weeks of seeing the River rise drastically due to the flooding up country. Although the water has risen and there is a fair amount of debris, fishing remains strong. We seem to be catching between 3-7 fish a day. There are lots of nice size fish around. We’ve been catching fish in the 7-foot range daily we’re still many more in the 60 -120 lb range. The salmon run seems to be picking up , with Sockeye entering the system and Chinook gaining a numbers . Although we can all fish for them at the moment, it provides a good  food source for the sturgeon. So we should see sturgeon fishing picking up in the next few weeks.

Well the river has been dropping and shaping up nicely. The spring freshet didn’t seem to last too long, and the river didn’t get overly high. With the dropping water levels comes better fishing , if you know where to find them. The sturgeon seem to be moving from their high water spots into their lower water spots. Fortunately for you we’ve been out daily and I’ve had no problem finding them. We’ve been averaging 3 to 8 fish a day. and this season there seems to be quite a few big ones around. Largest this season yet has been 9 ft 6 in caught a couple weeks ago. This fish calculated out to 554 lb. We’ve been getting lots of fish in the seven eight foot range, and the rest being around the hundred pound mark.at this time of the season the fish are fighting particularly hard , with most fish jumping clear the water when hooked. watching a fish over 200 lb clear the water is a sight to behold. The weather has been spectacular, so now is a great time to get out and catch your bucket list fish.

Sturgeon fishing for the month of May has been nothing short of epic. The Eulachon run has been strong, and the fish have been feasting. We’ve been landing 7 to 10 fish a day on our slower days, and up to 20 on our better days. Average size has been close to 100 lb up to 270 lb. That would be about 5 to 8 feet in length. Best baits have been Eulachon and salmon eggs. Great fishing should continue on through May. Water levels have been fantastic, we had a small rise of the river which brought some debris but the river level has stabilized now, and even dropped a little , making for perfect water conditions. This season is shaping up nicely, and it’s looking like it’s going to be a fantastic season. 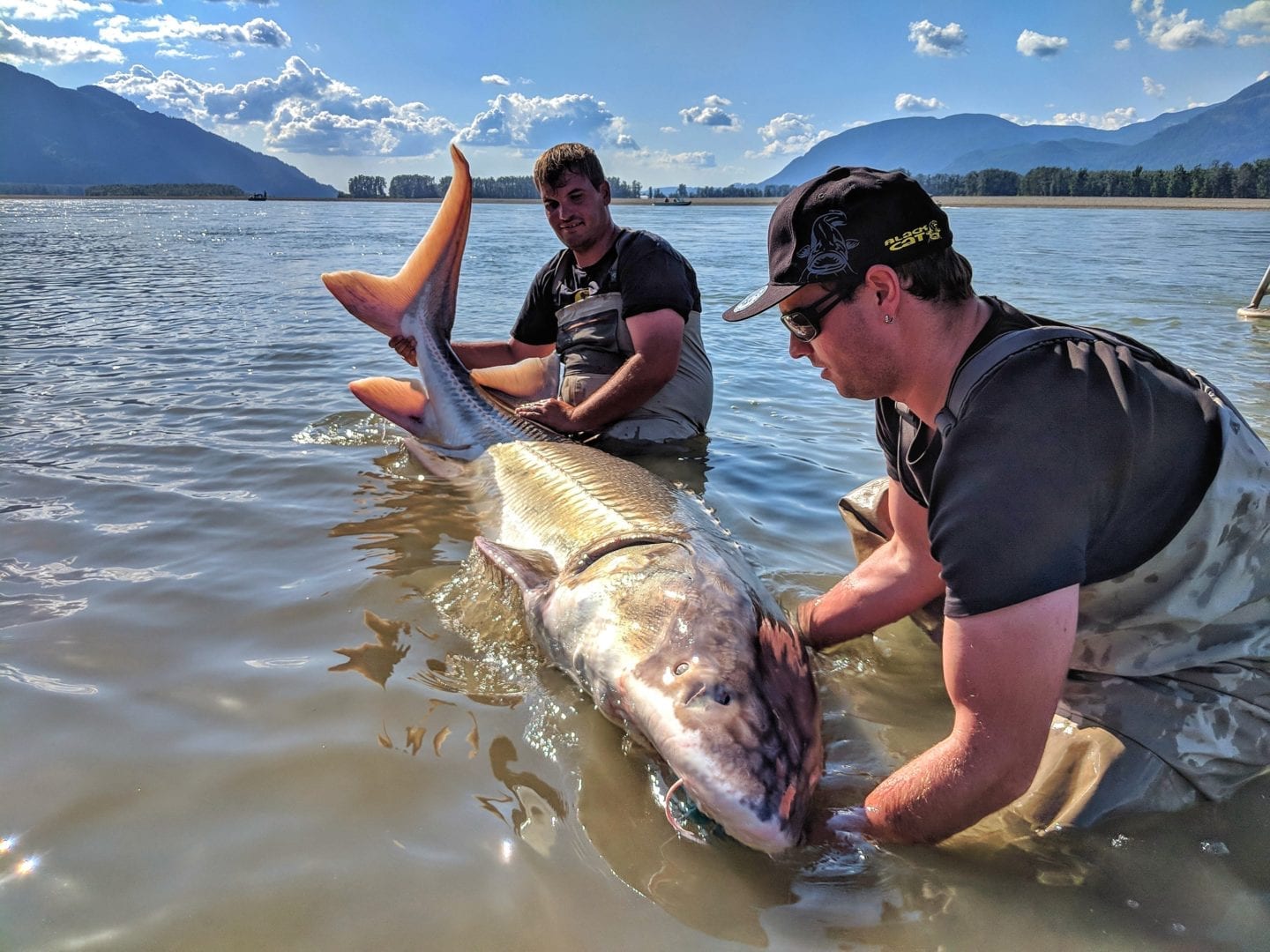 Spring is here, the weather is fantastic, and the river is on the rise. With the rising river comes the first feast of the season for the Sturgeon. The Eulachon are smelt that run up the river in April and May. Sturgeon gather to feast on these fish along with seals and birds. Sturgeon even enter the river from the ocean following this run of smelt.  With this food source comes fantastic fishing. We’ve been averaging as few as seven and as many as 20 fish a day. Sturgeon become quite aggressive as the feeding frenzy commences. The bites are hard with no hesitation , and the action is steady. This action should last through May until the Eulachon run has ended , and even past the end of the run. If you’ve been thinking about getting out, now it’s a fantastic time. The weather is good, the fishing is great, and we have a spring special on. 4 people  for $675 plus tax. Regular price is $750 plus tax. 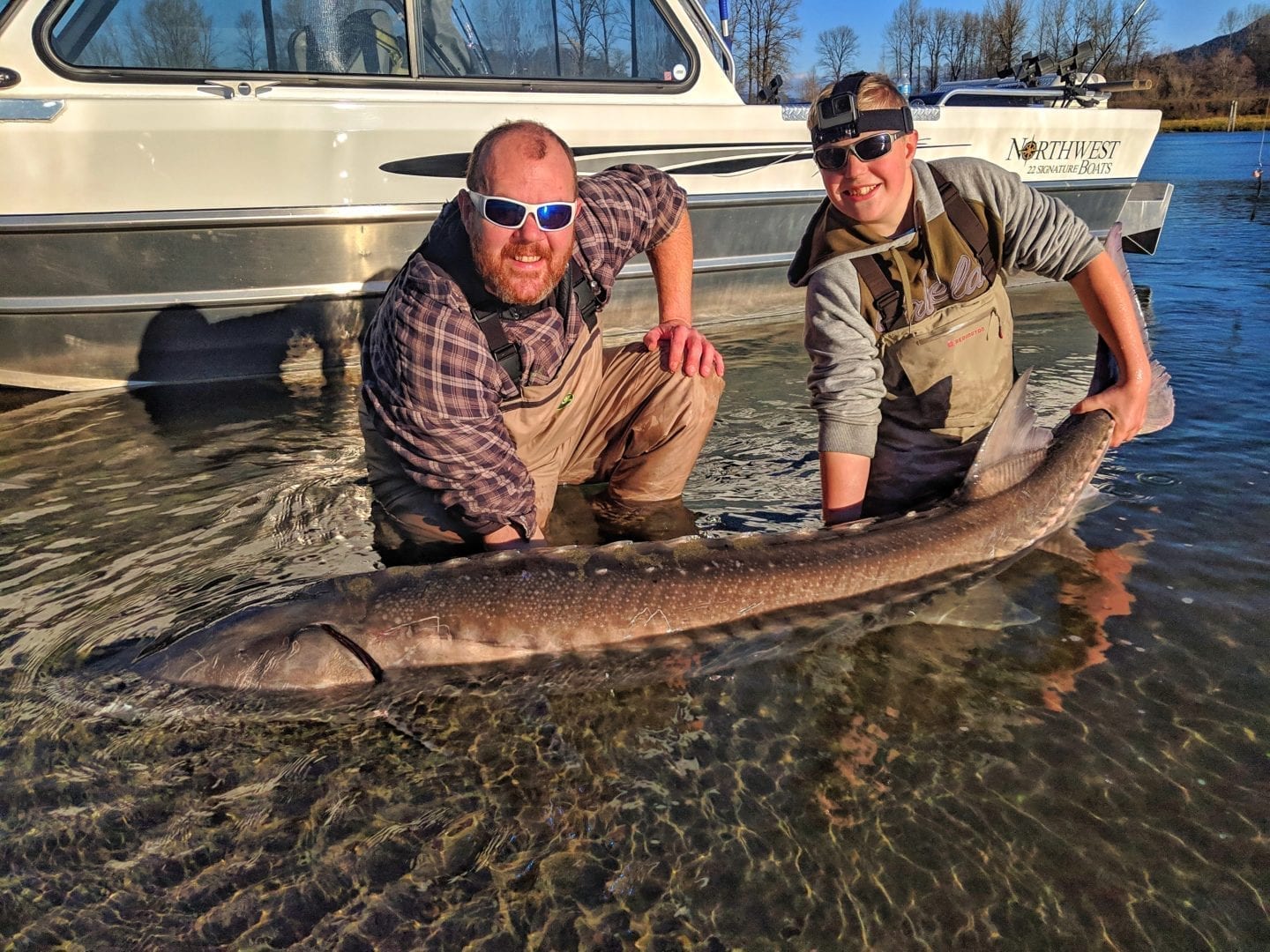 Great fishing has continued on into the fall. Fishing in October and November has been nothing short of fantastic with multiple hookups a day being the norm. There have been a lot of nice size fish as well, with suspicion the six to eight foot range on a daily basis. The weather has been a little colder, but our boats come equipped with fully enclosed tops and heaters, so everybody stays nice and toasty throughout the day. Good fishing will continue right through December which makes a fishing trip the perfect Holiday Gift. Bait of choice has been salmon eggs. There’s a lot of spawning salmon in the river and the sturgeon are keying in on the eggs. Just yesterday I had some clients out for a four hour trip , and we hooked up with four beauties plus many other bites. One of the fish was over 220 lb and the other was over 250 lb. I think it’s safe to say that both anglers went home with sore arms and big smiles. Providing people with experiences like this is what it’s all about for me. Come join us and find out for yourself or feel free to check out our other informative pages on Fraser River Sturgeon Fishing. 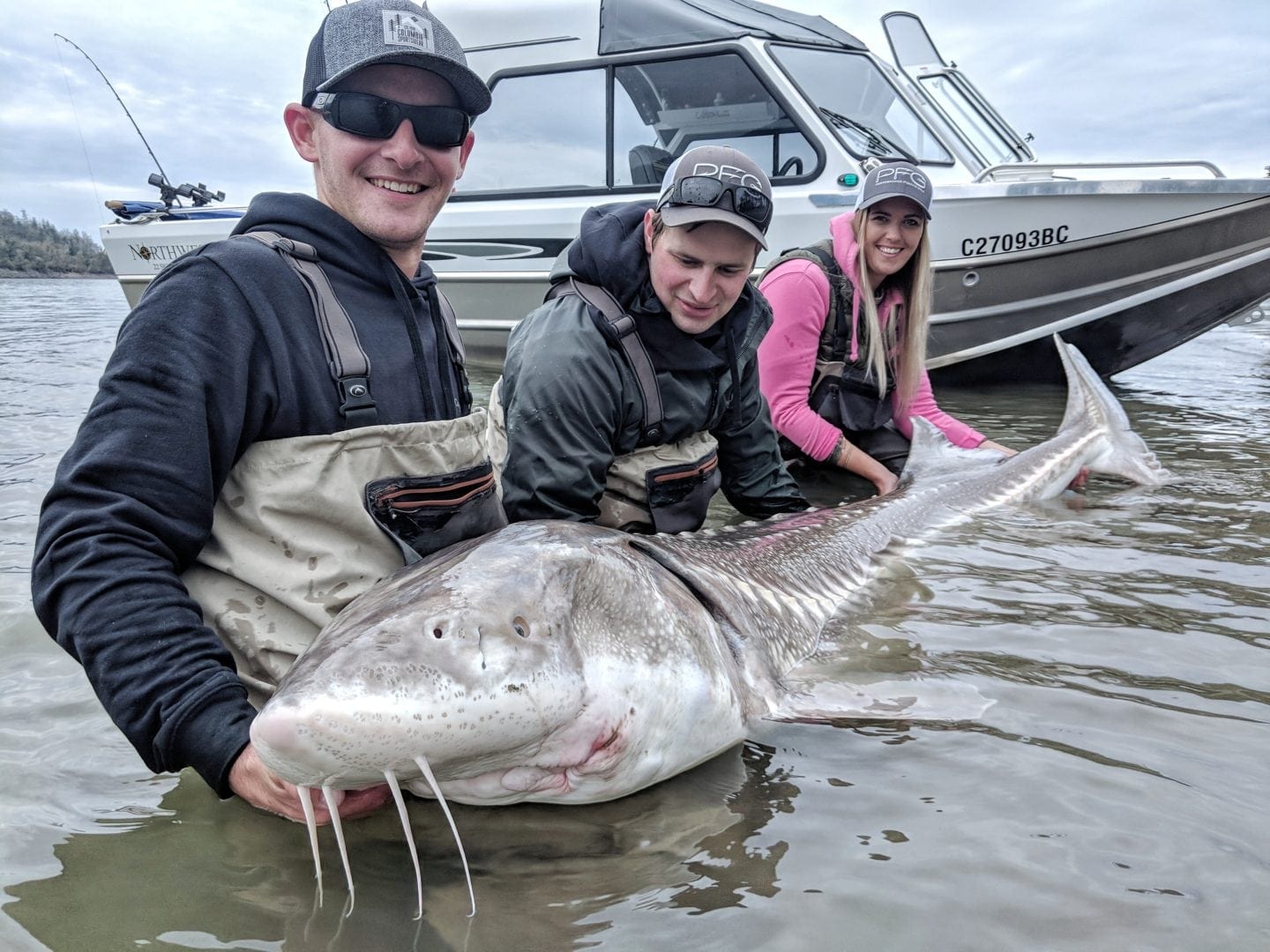 Sturgeon fishing on the Fraser River remains consistent. They have been taking a variety of baits but salmon meat seems to be the most consistent producer. We have been catching some absolute brutes as well. Quite a few fish over 8′ with ridiculous girths. We just got one the other day that calculated out to 391 lbs. Seeing a fish of this magnitude come flying out of the water is a sight to behold. Sturgeon fishing should pick up anytime now as they begin to fatten up for winter. Salmon fishing has picked up considerably as well. Chum fishing has been really good, as has the coho fishing. We target the salmon with jigs and spoons and spinners. Now is the time of plenty, and it will continue into November. Also, feel free to check out our other informative pages on Fraser River Sturgeon Fishing.

Sturgeon fishing has remained consistent, with an average of 4 – 7 fish a day. A lot of nice size fish being caught, the average has been around a hundred pounds. With fish in the seven to eight foot range being caught daily , which average anywhere from 200 to 300 lb plus. Last fish we caught the other day calculated out at 354 lbs. It was 97 in Long , with a girth of 47 in. The fishing is about to pick up as we head into October. October, November is the last Feast before winter, winter is famine and the fish know it. November in particular has some fantastic fishing for both salmon and sturgeon. A lot of people Overlook November, but if you’re looking for less crowds and killer fishing November is the time. The weather can be questionable, but our boat is fully enclosed, and we have a heater inside so everybody stays toasty. We still have dates available in November, so drop us a line if you’re looking to catch a beast. 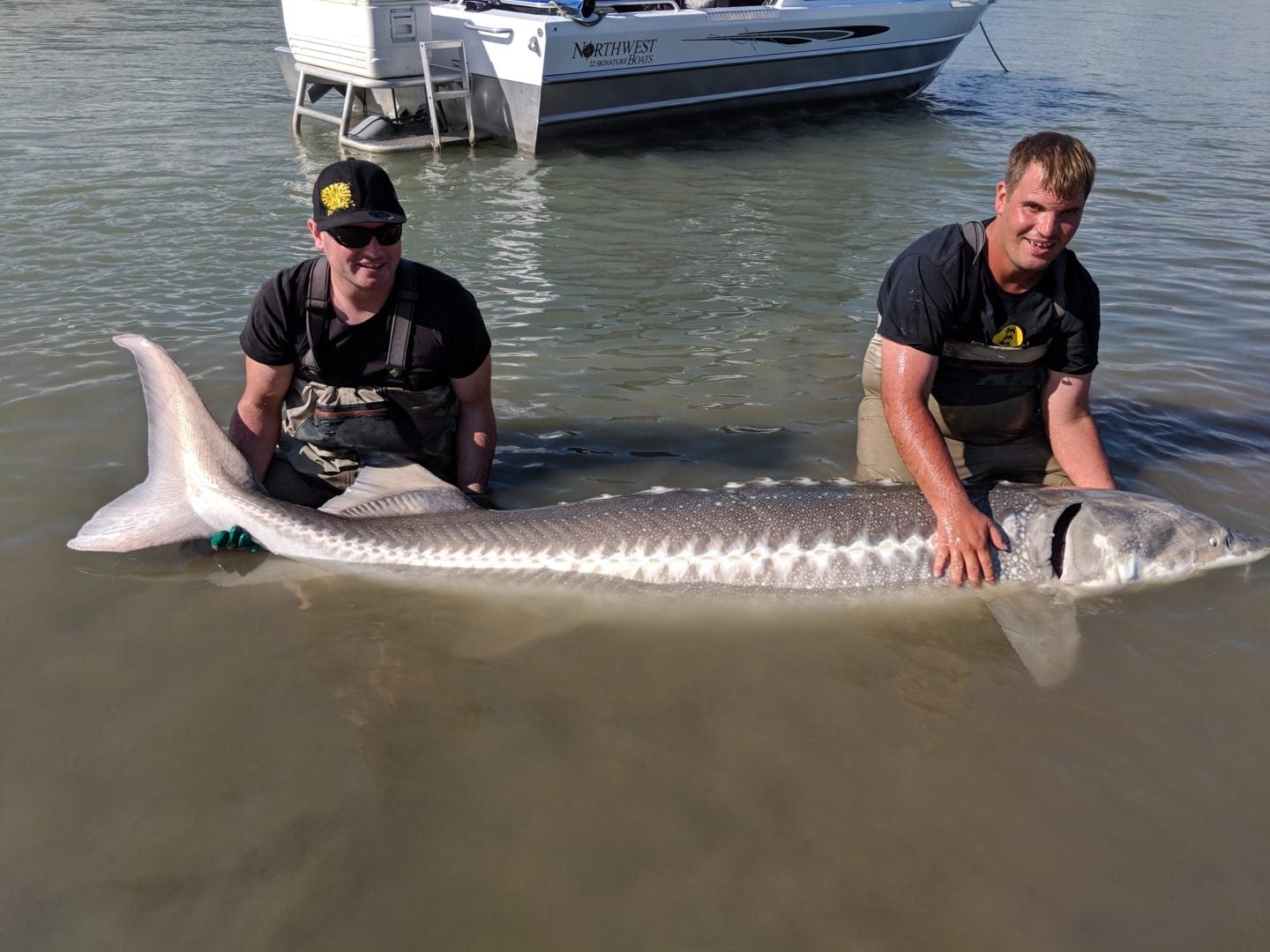 Sturgeon fishing has slowed a little, but remains consistent. last several days have been catching six to nine fish a day, and lots of nice size fish. Average size is just over 5 feet ,roughly 100lb and some fish over 200 pounds on a daily basis. We had some clients from Germany who are lucky enough to catch a 450 lb monster. This fish was 101 inches long with an astonishing 53 inch girth. This monster of the deep cleared the water three different times when hooked. If you’ve never seen a 450 lb fish jump clear out of the water when it’s on your line, then you need to come and go sturgeon fishing. It is truly a heart-stopping experience. The Fraser River also has a healthy run of Chinook salmon coming through right now. We’re also catching those every time we fish for them. These are large fish and you have an excellent chance of catching one over 30 lb. The average size of these Chinook is 12 to 18 pounds. They are aggressive biters and hard Fighters. Everything you could ask for in a salmon. If you’re looking to get yourself a trophy salmon sturgeon, now is the time. September through October is going to see some excellent fishing for both salmon and sturgeon. 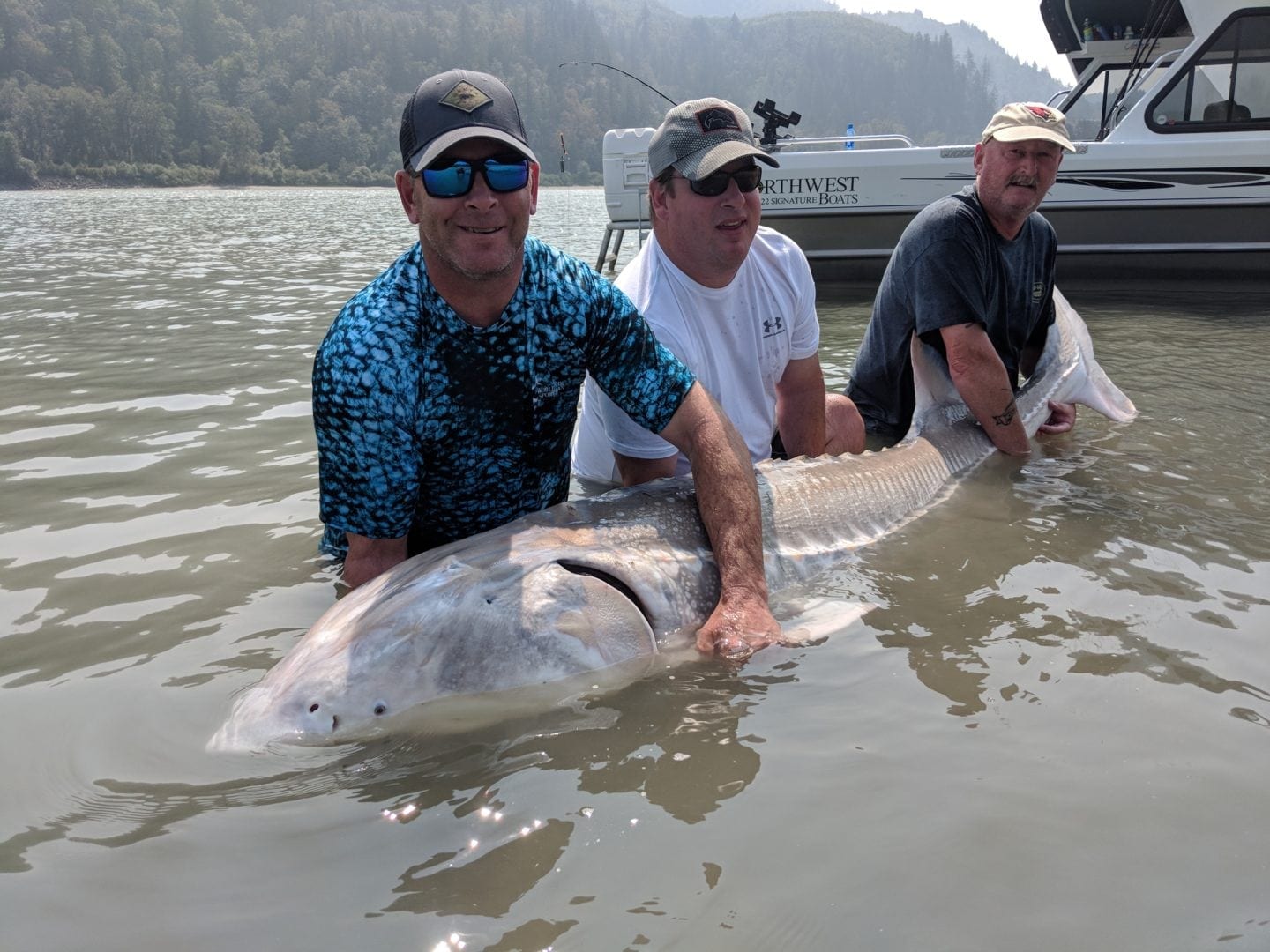 Sturgeon fishing remains strong and we are still averaging 4-9 fish a day. The sizes have still been good with an average size of a hundred pounds or more , roughly 5 to 6 ft. With the water temperature the way it is, the sturgeon are fighting particularly hard. There’s lots of food around and they seem to be hungry. We had one gentleman and his wife all the way from Holland , who managed to get several fish in the seven foot range and one 8-footer , along with several five Footers all in 2 days. I would Hazard a guess that he went home with sore arms. We also had one fish that tore off almost 200 yards of line in one shot. I expect this fishing to continue on into September , and it will only get better right through October. If it’s big fish or after now’s the time. Come and get your sturgeon freak on! 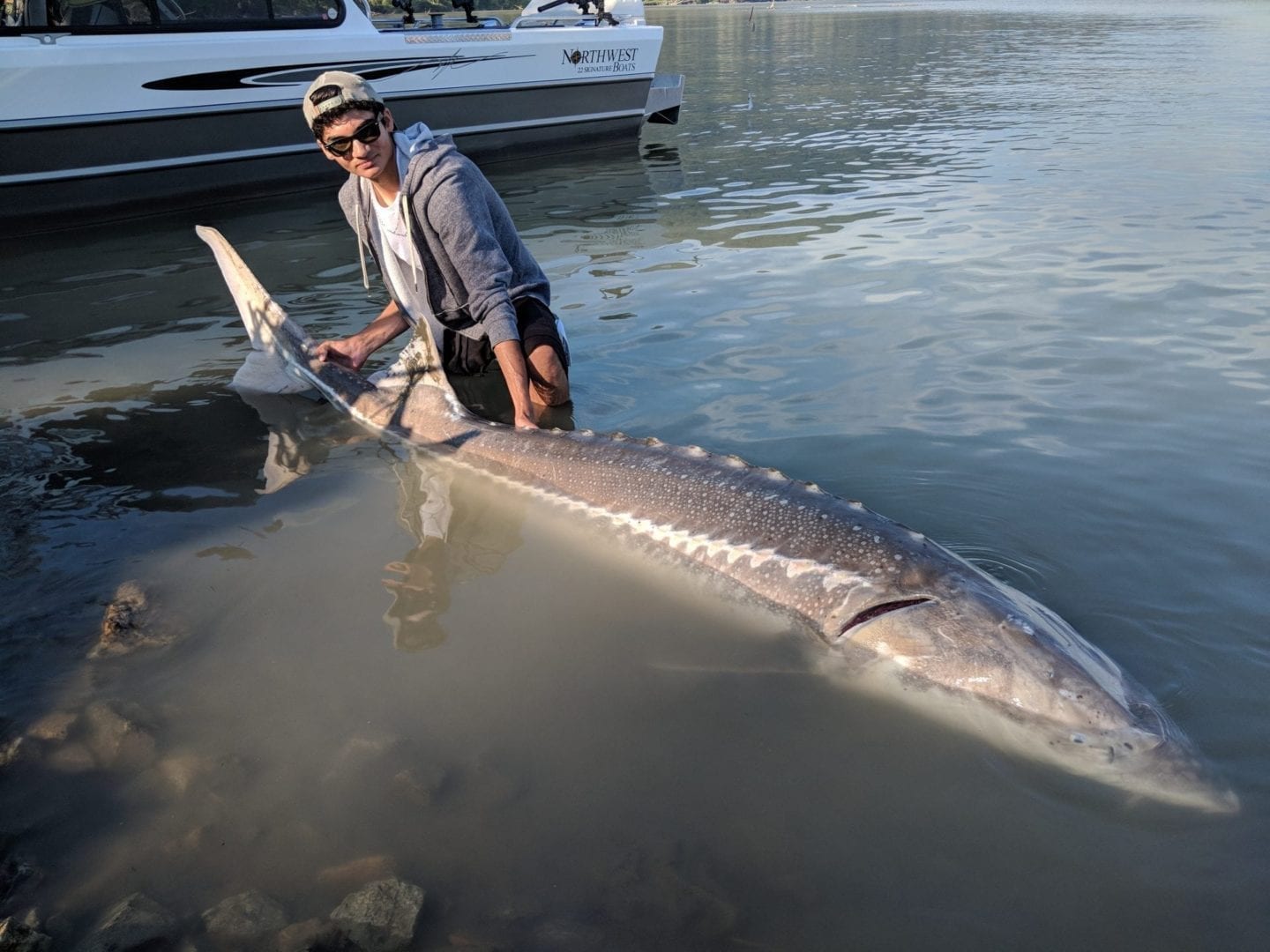 The Fraser River has been filling up with sockeye for a while now. We can finally fish sockeye for the first time in 4 years. This has made anglers happy because they can now try and put some tasty salmon in the freezer. Sockeye is one of the most sought after salmon for table fair, but people aren’t the only ones that enjoy eating this tasty salmon. Sturgeon also look forward to dining on sockeye. Its a common misconception that sturgeon are strictly bottom dwellers and scavengers. This may be true to a certain degree, but Sturgeon are also highly efficient predators. They come up of the bottom and hunt, looking for sockeye to eat. Sturgeon actually hunt and catch pretty much everything that comes into, or lives in the river. From eulachons, crayfish, lamprey, salmon and even freshwater clams. Right now Sturgeon fishing remains outstanding, we are still averaging 6-9 fish a day hooked, with many more bites. Fresh sockeye is the bait of choice. there is no hesitation when the sturgeon smells the bait. Bites have been quite violent, with, on many occasions, the rod just folds over and line is screaming off the reel. In fact most clients have trouble getting the rod out of the holder because the fish is pulling so hard. A problem few people complain about. With the water being a touch on the warmer side the sturgeon are fighting extremely hard. I had one young lad from Ontario who made it his mission to fish Sturgeon on the Fraser River, his second fish of the day ended up being a 358 lb monster that cleared the water on its first of eight jumps. We were only rising for five minutes when he hooked his first fish, a feisty six footer that was lost on its second jump, then hooking the 8’ 4” monster after 15 minutes of recasting the lines. The average size of the Sturgeon has been five to six feet, with fish in the seven foot range daily. If one decides that this is something they have to experience, then now is the time. You will not be disappointed. Tight Lines Everyone! -Johnny